Opinion: There is nothing stopping Liverpool from beating Man City to silverware

Home » Opinion: There is nothing stopping Liverpool from beating Man City to silverware

Although most Liverpool fans, at the start of the season, would have deemed the UEFA Champions League landing in one of our rivals’ hands an unequivocal disaster, I’m certain that for most of us Chelsea were the lesser of two evils in Porto.

The very notion of Guardiola’s side securing a treble after we had ended the season empty-handed was simply too horrific for me, as well as plenty other Reds I’m sure, to fathom. It also would’ve meant relinquishing our favourite bragging right over City where silverware is concerned: our European pedigree.

But this gift-wrapped bit of schadenfreude could come at a hefty price for the Liverpool. City’s pecuniary power is no secret, and if history is any indicator, their heartbreak in Porto last month could well spur a spending flurry in the transfer market. After all, was Ruben Dias’ arrival not a consequence of Aymeric Laporte’s injury the previous season, and City’s subsequent second-place league finish? Pep and co. have built a fearsome reputation for their cold efficiency in righting the wrongs of the previous season.

Plenty of City’s rivals will also be glad to see the back of Sergio Aguero, none more than the Liverpool faithful. It seemed at one point that the Argentinian’s terrorism of the Reds’ defence had become an annual event. But all eyes will be on whom City replace him with. Erling Haaland, Harry Kane and Kylian Mbappe have all been touted as potential heirs to the throne, and all would spell trouble for the rest of the league.

At full-strength, this Liverpool side is head and shoulders above any team in the league bar City. If we are to mount a title challenge next season, then you can have every confidence that we will be challenging Manchester City; and it would probably be easier to face a satiated City side hungover from the previous season than a wounded one out to make amends.

Yet, at the end of the day, Pep Guardiola’s squad is already worth hundreds of millions more than Klopp’s. If our comparatively small spending power was going to quash our ambition, it already would’ve a long time ago. The Reds didn’t clinch the league last year, or the Champions’ League the year before, by out-spending our rivals. It was done by virtue of grit, determination and our manager’s tactical prowess.

We’ve already been prepared by club-affiliated media outlets for a quiet summer. While that isn’t ideal, it shouldn’t predicate excessive pessimism for the upcoming season; something that our fanbase has an unbecoming propensity for. If this team can rediscover the winning mentality it developed in 2019, there is nothing stopping us from beating City and anyone else to silverware - budget or not. 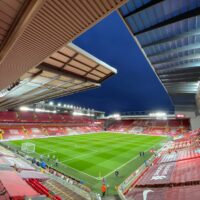